Cookie Crisp Cereal.  What a sneaky way to get kids to eat their breakfast.  Not to mention an equally sneaky way to trigger me into late night snacking.

If there was ever a retro packaging resurrection I'd like to see.. Cookie Crisp would rank right up there at the top of my list.  I miss seeing Jarvis the Wizard turning kids drab and boring breakfast cereal into bite sized cookies.  There was even a vanilla flavored version that I loved equally as much as the chocolate chip Cookie Crisp back in the day.

I vividly remember the following Cookie Crisp Commercial from my youth.  It's from an era where cereal manufacturers used to actually try and compete for your business with clever marketing. They did this by catering directly to their main consumer, which were kids.


The 'Cookie Crook' was introduced while Cookie Jarvis was still the Cereal's mascot. Quite suddenly however, Cookie Jarvis disappeared in 1985 and was replaced with the Cookie Crook who was always lurking around, hoping to score some Cookie Crisp.  Hot on his trail was 'Officer Crumb', a police officer looking to bust the Ne'er-do-well.

The storylines and skits that ensued, were in the style 'Keystone Cop' Comedy.  Further into the cereal's run, Cookie Crook gained a canine crook sidekick named 'Chip'.  The crook's plans to steal Cookie Crisp were usually foiled when Chip would get overly excited and uncontrollably start to howl "Coo-ooooooookie Crisp!" 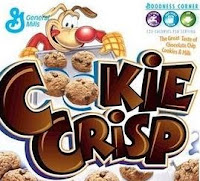 Eventually in the late 90's, Officer Crumb and The Cookie Crook were dropped, and Chip became the sole mascot.  Rather than a thief, the commercials usually featured him giving kids cereal while howling "Coo-ooooooookie Crisp!".  Officer Crumb was present for a short while, but was now trying to take the cereal away from kids because it was unacceptable to eat cookies for breakfast.  Chip would somehow manage to foil Crumb's plans and save the day.  After Officer Crumb's disappearance, authority figures such as teachers, park rangers, little league umpires etc. would act as the antagonists, telling kids they couldn't have cookies for breakfast. 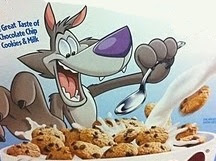 In 2006, Chip the dog was dropped altogether and replaced with 'Chip the Wolf', who succinctly pilfered Chip the Dog's catch phrase "Co-ooooookie Crisp".   He was a sneaky Wolf who would try to take kids Cookie Crisp cereal using gadgets etc he had created.  His plans were usually brought down by the same kids he was trying to steal from.  I personally can't remember seeing any new commercials featuring Chip the Wolf for close to ten years now, but he still graces the cereal boxes, and honestly looks like any other cartoon animal you would see on a multitude of generic brands of cereals out there.

I still buy Cookie Crisp on occasion, but apart from being able to eat an entire bowl of cookies (one of my favorite pastimes) the magic I remember as a kid is gone.  Breakfast cereals were a lot different when I was a boy.  The cereal companies employed animators to produce a constant slew of adventurous cartoons in commercial form.  They also commissioned toy companies to make the great in-box prizes and toys that so many of us remember from our youth.  In television commercials and comic books, cereal mascots took on a life all their own.

Thankfully.. companies are catching onto consumers fondness for the way things used to be, and there are more hopping on the retro packaging bandwagon everyday!  Hopefully General Mills will include Cookie Crisp into their ever changing limited edition lineup of throwback packaging.  Maybe they just need a little feedback to encourage them to do so?  Below is a link to bug err.. encourage General Mills to bring back Jarvis the Wizard.


Ask General Mills to bring Jarvis the Wizard back!

Heck.. while I'm at their site putting in my monthly vote for a Jarvis revival, I may even ask them to bring back Vanilla flavored Cookie Crisp as well!