Today I got the sad news that Prince Markie Dee of the Fat Boys has passed away at the age of 52. I've got to say that I was really shook when I read the news story during my lunch break at work. The Fat Boys were the hilarious and lighthearted soundtrack of my youth. I wore out cassette tapes of theirs multiple times, and all my friends and acquaintances without a single solitary doubt, knew they were my favorite rap group.
The trio were teenagers just as I was, when they blew up in the mid 80s. Being very close in age to them, along with being a lifelong member of 'The Big Guys Club'.. I related to much of what they rapped about. Due to my upbringing, I took myself much too seriously for a good part of my youth and even adulthood. These kids embodied an attitude towards life that was the total opposite of mine. It was a carefree spirit I desperately wished I could experience myself. 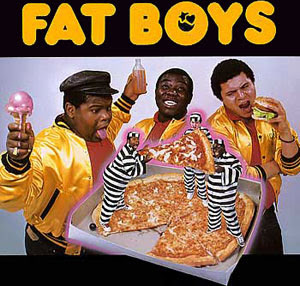 I spent my hard earned money from mowing lawns on all of their albums, 12 inch singles, and cassettes. Many simply considered them a novelty act, but I saw them as much more. These were big buys with BIG appetites for life. They rapped about stuff that made me laugh, and things that I loved, like Pizza and buffets. They also rapped about life, love, the struggle, and I hung on every lyric they spit.

To me.. it always seemed like Big Guys had to sit on the sidelines while other guys bragged, boasted, and exuded confidence. This was the first time I had ever seen guys like this actually Flex and proudly rap about  themselves in detail.

The members of the Fat Boys consisted of Mark Morales, a.k.a. Prince Markie Dee, Damon Wimbley a.k.a. Kool Rock Ski, and last but certainly not least, one of the Godfather's of Beat-boxing, Darren Robinson, a.k.a. 'Buff Love, but most commonly known as.. The Human Beat Box! The three friends grew up rapping in the same neighborhood, and when Darren's family couldn't afford a drum set for him, he perfected mimicking percussion beats with his mouth for Markie Dee and Kool Rock to rap to.

The group originally called themselves The Disco three, and actually won their first recording contract by winning a rap contest at Radio City Music Hall. It was during an early European tour when their manager received a $400.00 hotel bill for extra breakfasts the 'Disco Three' had consumed. It was at that point when he angrily confronted them with the bill and told them they ought to call themselves the 'Fat Boys'. The rest as they say is history!

The rap game has changed immensely since I was a kid, but there is one constant I've always been aware of, and that is.. rappers that take themselves too seriously.  The Fat Boys did anything but that. They had a style that was all their own, straying from the conventional rappers of the day. They weren't ashamed of who they were, had a good time in everything they did, and rapped about it in a humorous and non vulgar way. That positive vibe they were throwing down, was picked up by millions of fans, and they had an incredibly successful musical career throughout the entire decade of the 80s. 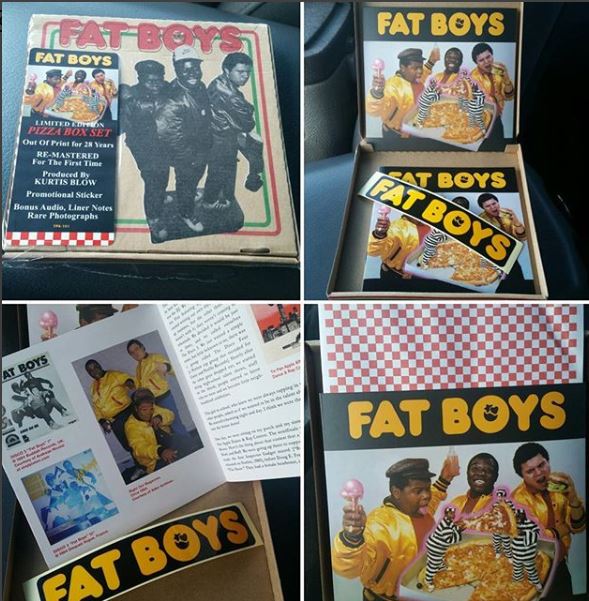 I've personally owned the Fat Boys debut album on cassette, CD, and vinyl. Today it still gets regular playtime on my MP3 player. However, my favorite version I've owned HAS to be this Limited Edition Pizza Box Set! The CD comes with a sticker, bonus audio, liner notes, and rare photographs, all buttoned up in its very own little pizza box.
Solidified in pop culture
The Fat Boys were everywhere in the 80s, and were truly a force that could not be ignored.  They co-starred in the 1985 hip hop movie Krush Groove with RUN DMC, and starred in their own movie "The Disorderlies".  They even made appearances on many hit shows of the time like Miami Vice.  Below are a few musical collaborations you may or may not remember.. 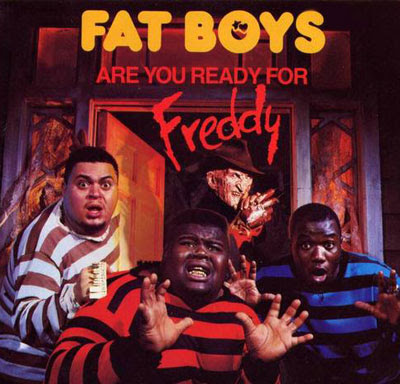 In 1988 during the height of The Nightmare on Elm Street craze, The Fat Boys recorded a single entitled "Are you ready for Freddy?"  Robert Englund who played Freddy Kruger, even co-starred in the music video with the boys. 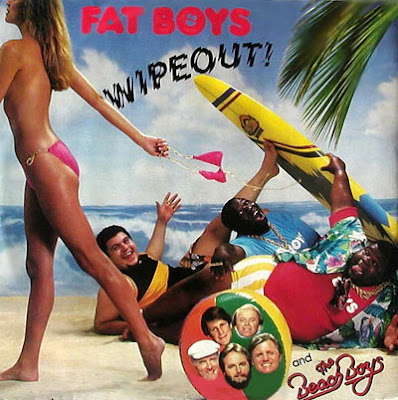 In 1987 The Fat Boys recorded a remake of The Surfari's song 'Wipeout' with the Beach Boys. The song was an instant hit and garnered lots of playtime on the radio.  It was a fun song that I remember lots of people playing at barbecues and parties. My bride who despised rap was even a fan of this song. 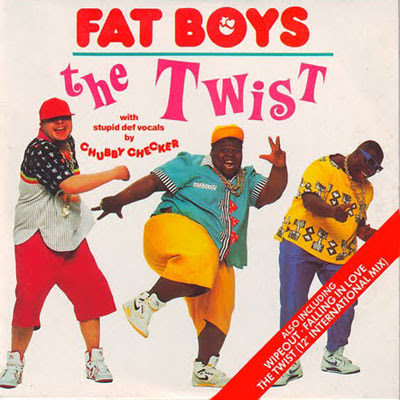 Another collaboration was 'The Twist'. They sang it with Chubby Checker who recorded his original version almost thirty years earlier. The interesting thing about this song, as with their single Wipeout, was that it appealed to people who didn't necessarily care for rap music. The Fat Boys crossed over and snagged a whole new demographic of music fans, including those who were a little bit older.

Into the 90s
Prince Markie Dee broke off from the Fat Boys in 1990 to pursue a solo singing career with modest success. He then found his forte successfully producing music for artists like Mary J. Blige and Mariah Carey.  Kool Rock Ski and The Human Beat Box kept the group together as a duo, recorded one last album in 1991 and disbanded shortly thereafter.  Kool Rock Ski dropped some serious pounds, got physically fit, and even became a personal trainer!  In 1994, all three members of the group were talking about a Fat Boys reunion and new album, when Buff Love was diagnosed with lymphedema.  On December 10th of the same year, Buff passed away at the age of 28 due to cardiac arrest.

Buff is often referred to as one of the pioneers of beat-boxing. Back in the 80s, kids would try their hardest to mimic his technique (myself included). Fast forward to today, and all kinds of artists including acapella groups utilize the skill. Kool Rock and Markie Dee were talking about future plans for a new Fat Boys album a couple of years back. I heard at one time, they were even considering doing a reality show to search for the next Fat Boy. Now, their dreams will never come to fruition. It's now truly the end of the Fat Boys era, and the finality of it all really bothered me.

I slowly lumbered to my car after work today, feeling like a dark cloud was hanging over my head. I sat in my car for a moment and then picked up my phone. I pulled up YouTube and began streaming my Fat Boys playlist to the stereo. On the drive home I reminisced about the good old days, attaching clear memories to songs I was listening to. Memories like the warm summer afternoon in 1987 I spent cruising around town all day in my old car with friends, jamming out to the Fat Boys album 'Crushin'. Or the time I snuck out for a couple hours to attend a house party and the Fat Boys song 'Sex Machine' was playing when I walked into the garage where everyone was dancing.
I found myself rapping along to lyrics I learned in 1984, and was visibly cracking up at funny verses from multiple songs. I couldn't believe it. I actually felt better. Yes, Markie Dee and the Human Beat Box are gone and the Fat Boys will never again perform together. However, their music lives on and has a life of its own. I'm sure millions of others who grew up with them feel the same way I do. I'm truly thankful for all the joy and happiness their music provided, and I can attest that I will personally carry that with me for the rest of my life. That 90 year old cat you see on his porch jamming out to the Fat Boys.. that will be me.
Rest in peace Markie.. rest in peace Buff.
80s Retro Retro Music