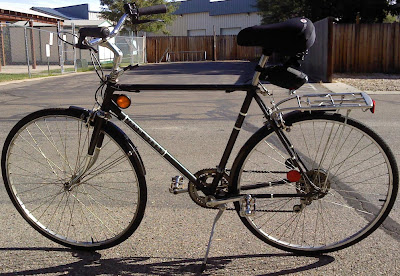 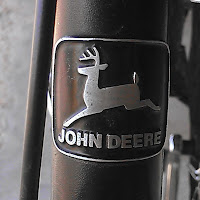 This year I completed a recent bike project.. a 1972 John Deere 10-speed that my old man handed down to me.  These bikes were only made for three years, and were sold exclusively at John Deere retailers.

At 71 years young, Dad is easing away from tinkering on bicycles a bit, and is making good use of his time cruising around on his Gary Fisher racing mountain bike.  He knew I would restore the old John Deere bike to its former glory, and in turn get good use out of it, so he gifted it to me last year.

As you can see from the picture above, this bike looked more like a mountain bike hybrid than a vintage 1970s 10-speed, and with good reason.  The forward riding posture that the typical road bike requires wasn't conducive to my Dads age and style of riding that he has grown accustomed to.  Therefore, a comfort bike seat and cruiser style bars were added to acquire his desired upright riding style. 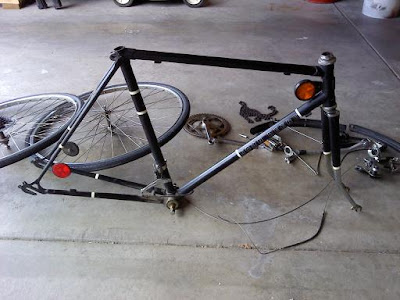 I had stripped the bike down and was ready to start going through the bike to clean it up, pack the bearings, etc.  I wanted to add some yellow and green accents to the bike as a nod to the John Deere brand, but was stumped as to what I could do.  I finally decided to remove the white pin-striping from the bike, and replace it with some yellow and green stripes.  I was ecstatic at what I found underneath the striping I removed.. 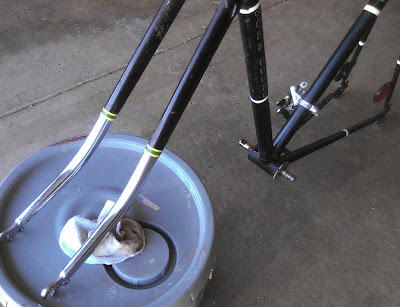 When I peeled the tape back.. I found green and yellow factory striping perfectly preserved under the white tape. 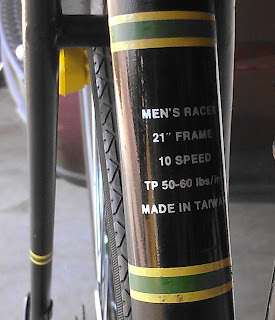 Apparently someone along the way decided they didn't care for John Deere yellow and green, and covered the factory striping with white tape, which helped to keep the original stripes from fading and peeling. 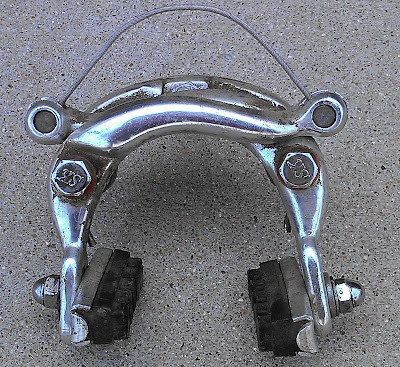 Brake Caliper fresh off of the bike 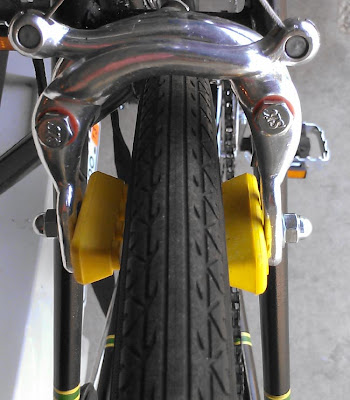 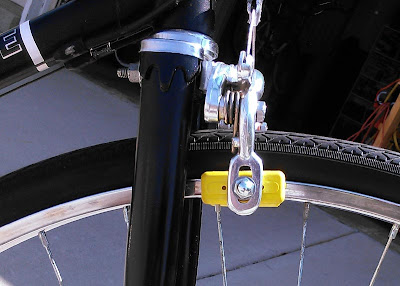 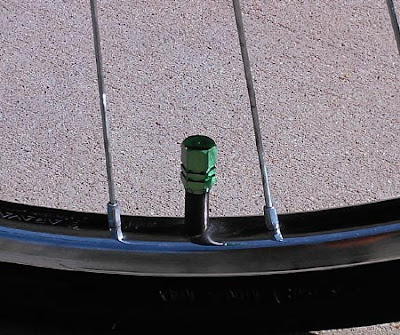 
I didn't do a full blown restoration on this bike.  The paint was in good enough shape to where I simply had to clean and shine up the frame and forks.  All that was left was to clean, oil, grease, and tune the components of the bike to get it running like new again.

I very much wanted to get this bike back to looking and riding like a 1970s 10-speed racer should, but what most excited me was to restore this bikes retro look.  Replacing the cruiser handlebars with vintage drop bars helped immensely in this respect.. 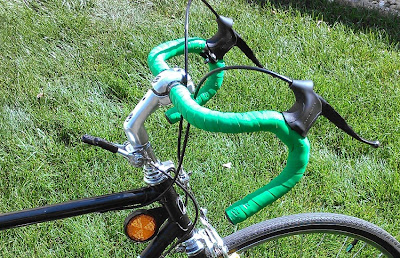 I found the drop bars on eBay for $9.00, and covered them with green Deda foam handlebar tape.  While it isn't exactly the same shade as John Deere Green.. they came pretty dang close.  The sunlight in the picture above makes the tape look a couple shades lighter than it actually is.  A nice contrast against the green tape, are the black rubber hoods that sit over the hand brakes.  I found them on Amazon for $6.00, and they slid over the brake handles perfectly with no need for any modification. 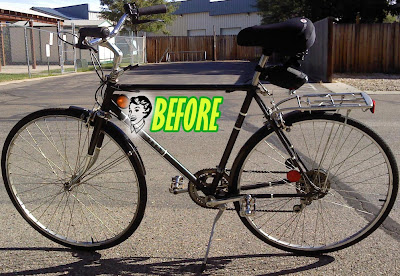 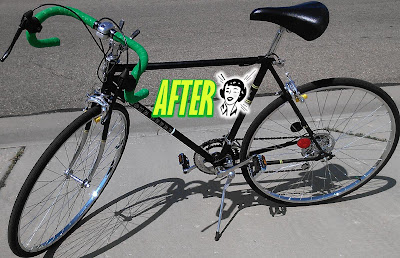 As you can see, a few modifications can drastically change the appearance of any bike.  Accents like chrome fork tips, reflector setup, John Deere badge, and John Deere lettering, make this 70s retro gem unique all unto itself. 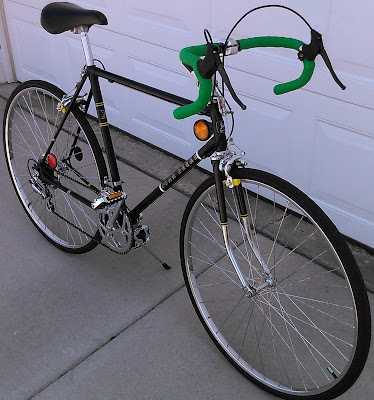 This project was an enjoyable one, and turned out being a lot easier than I thought it would be.  As you can see, I ditched the front and rear fenders which I learned were not original to the bike. The rear rack while useful, was also an aftermarket product, so I didn't reinstall that either.

Projects like this one can really nickel and dime you, but fortunately for me.. this bike had great bones.  I swapped out the cruiser seat, oxidized seat post, and a couple of  frayed cables with ones I had floating around my garage, so the total cost of this rebuild was just shy of the $40.00 mark.

Costs incurred were for handlebars and foam tape, rubber hoods for the hand brakes, new pedals, valve stem caps, brake shoes, and a couple of cotter pins for the cranks. 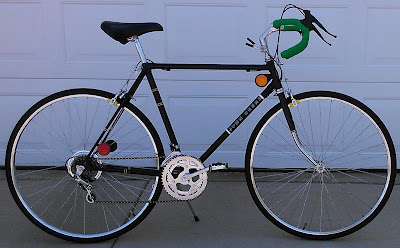 The 1972 through 1974 models of John Deere bikes were actually scoffed at back in the day as they were made in Taiwan.  However, the fact that this bike still sports about 80% of its original parts, is a credit to just how much better things used to be built.  To boot.. this is a bike that was ridden vigorously for decades. Its first owner was an avid cyclist that rode it for 20 years.  My Dad bought it, fixed it up, and rode it for another 10 years on bike trails in Colorado.  And finally.. before I obtained it, my brother used it for close to eight years as his sole means of transportation.  He actually put so many miles on it, the chain rollers were practically worn through from friction.

Heck.. I've bought brand new bikes over the years that didn't last longer than five years time.  This bike is still going, and with care and upkeep will most likely last another 40 years.  I look forward to going on some long trail rides with this classic, and am anxious to test its limits as well as my own.

I'm an enlightened 20th Century Retro Dad.. obsessed with Disney, pop culture, and the recent past. Welcome to my corner of the web that I fill with content about these and many other topics. 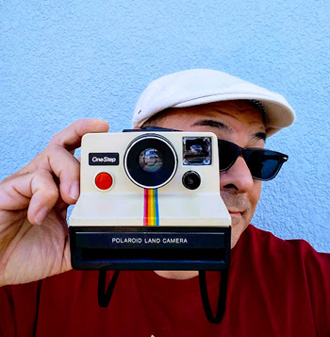 Oh yeah.. you can also find me as @theretrodad on both 'the twitter' and Instagrams

This week's most viewed.. 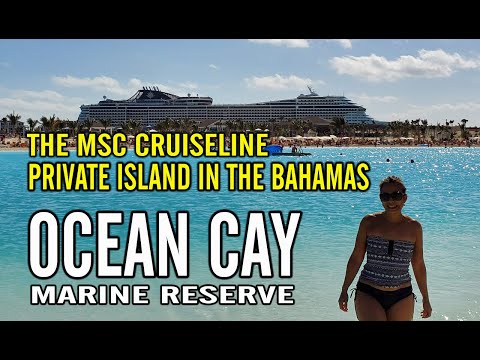