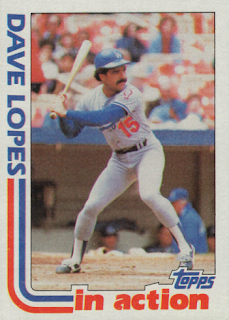 I first heard of Dodgers player Davey Lopes in the mid 1970s via my brother.  He was my brother's favorite player, and quickly became mine as well.  Davey Lopes started playing with the  L.A. Dodgers as a rookie in the fall of 1972. I started keeping an eye on his career in the late 70s when the Dodgers had an incredible series of seasons leading up to their 1982 World Series win against the Yankees who were a force to be reckoned with during that time. The late 70s and early 80s was a great time to be a Dodgers fan, and Davey Lopes had a lot to do with that.

Davey Lopes was an incredibly versatile player with both speed and power, packed into a wiry 170-pound, 5'9" frame. What he lacked in power, he more than made up for with speed! That speed made him one of the most feared stolen base leaders in the game. He stole 557 bases during his 16 season career in Major League Baseball.  He stole 38 consecutive bases without getting caught in the 1975 season, breaking a standing 53 year record previously held by Max Carey. Lopes ranks 26th highest of all time in most stolen bases. However, what's really amazing, is that his success rate of doing so without getting caught is just over 83%, with 557 steals in 667 attempts.  That stat ranks him in the top ten best of all time, among players who had 400 or more stolen bases during their careers.  This guy made magic on more than one occasion, and we were witnesses to it time and time again.

My brother and I had polar opposite tastes in movies, but one movie we absolutely loved was 'The Sandlot'. The last scene of the movie, shows the character Benny 'the Jet' Rodriguez as an adult who is now a pro ball player with the L.A. Dodgers.  He is playing for the team during the same era Davey Lopes did, and ends up stealing home base.  David M. Evans who wrote, directed and narrated the Sandlot was a big Dodgers fan, and my brother and I always wondered if the adult version of Benny may have been loosely inspired by Davey Lopes. We never were able to corroborate this theory, but we always felt proud of ourselves for making the possible connection. 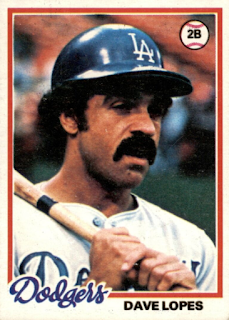 My brother inadvertently got me hooked on and involved in the hobby of baseball card collecting, when he gave me a 1978 Davey Lopes Topps baseball card that was one of his doubles. I loved everything about that card; the fancy cursive, the little baseball with Lopes player position, the crisp red border around the photo, the battering helmet he was wearing over his cap, and the multitude of stats on the back of the card.

The love of that card evolved into a hobby which in turn morphed into a pretty good side business for me. I would set up tables at flea markets, swap meets, trading card shows, etc. and made some pretty good money throughout the 90s. The side business paid for any cards and collectibles I wanted to buy for myself, and also provided me with a little walking money. I even almost went into business with a friend who started a sports card and collectibles store. A decision I'm glad I decided against, as the bottom totally fell out of that market in the late 90s.

I've since gotten out of the hobby, but have retained my collection of every Davey Lopes Topps brand baseball card ever made during his career as a player. My brother only collected Topps sports cards because they were miles above the competitors cards of the time. I followed suit for awhile, but eventually broadened my collection with other card brands.

All of my Lopes cards fit nicely in a small collector card album that I thumb through on occasion. You can see every one of my cards here where I've indexed them all. That '78 Davey Lopes card however, is still my favorite card in the collection. It's the card that got me into card collecting, the Dodgers, and reminds me of good times with my late brother.  I love the card more every time I look at it, and am still in awe of it to this day. 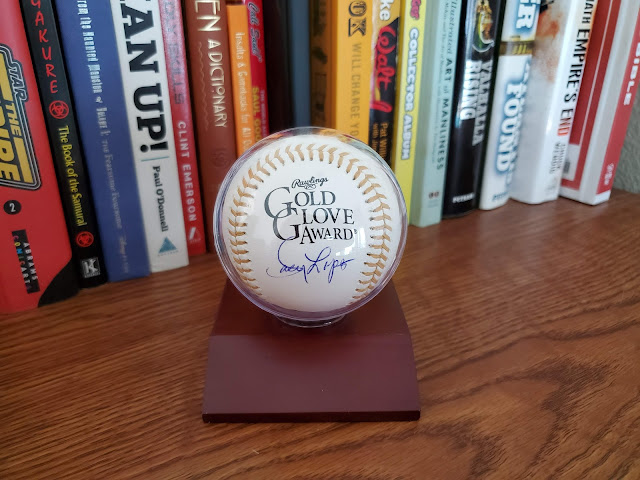 One collectible I attained that I wish my brother were alive to see, is my Davey Lopes autographed baseball. This is one of the balls from a signing to commemorate Lopes Gold Glove Award in 1978. I remember first getting this ball and removing from its box. The smell and feel of the soft rawhide, the gold colored stitches, along with his signature in blue ink, made me feel like I was holding a work of art. I personally don't know anyone else who would appreciate this ball more than my brother would have.

The next item on my list to obtain is a Davey Lopes Dodgers jersey. I've been wanting one for years and have decided its time to pull the trigger. I also may expand my card collection starting with oddball Lopes cards made by Kellogg's etc. I also very well may start collecting Fleer and Donruss cards from 1974 to 1988. I still don't like them as much as the old Topps cards, but they do have a feel to them that embodies the era they were made, and I'm looking forward into revisiting them.  And of course, any new and unique additions to my collection will probably be shared here, so keep an eye out if you are also a Davey Lopes fan.